In 2014, you have one more reason to visit Rome in December apart from witnessing the beautiful Christmas decorations and Vatican Christmas events. Connekt Expo participants of Rome 2014, are bringing to Rome unique experiences and surprises that are a must see.

Connekt 2014 featured film maker who will also be present for all screenings of his film to answer questions  is the award-winning Louis Mouchet.

An established Swiss filmmaker from Geneva, Louis is the winner of Swiss Quality Premium for François Simon the Presence and blackbox award for his short fiction The Last Eye. Louis seeks to reveal the beauty of the world through his films.

Connekt Film Expo 2014 will be screening his film Rromani Soul on Dec 18, VIP day, from 3:30 to 4:30 pm,  Friday Dec 19, Private Viewing Day, from 4:30 to 5:30 pm [access limited to Groupon clients, media, and guests who have received invitation from participating Connekts], and Sunday Dec 21 from 4:30 to 5:30 open to public. All sessions are followed by a Question and Answer with the Film Maker.

Who are Gypsies truly? Where do they come from?  What do they believe? Is Gypsism a religion? The documentary Rromani Soul reveals for the first time ever the true and unique origin of the Gypsies which is quite surprising. When I first heard him tell me about it, I could not believe. I will not be exposing the answer as I don’t want to spoil it for those enthusiastic film lovers who want to join Louis through his documentary in his trip around the world in pursue of this answer at Connekt Film Expo 2014. In the meantime, please feel free to get some hints from the posted behind the scene photos and post your guess under this post. The ones with the right guess will get a free pass to see the film on Private Viewing day during which special events are happening inside Connekt.

Here is the trailer of Rromani Soul:

In the interview I had with Louis, here’s what he shared about his film: 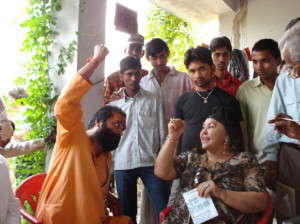 What made you decide to do a film about the life of Gypsies?

The culture that travels and survives despite all odds is a theme that I am deeply passionate about. I have treated this theme in my film Blues Road Movie. It was very interesting to develop it in a totally different context. Comparing to the epic of African-American, the Gypsy journey is wider geographically and historically. It is event more fascinating.

I have always been enthralled by the Gypsies or Rroma people as they call themselves: their music of course, but more particularly by their spiritually. I love the very peculiar rituals they perform regardless of the religion they have embraced. I see these as a good example of pure spirituality beyond the existing religions, which, despite the etymology, are more dividing than unifying.

You traveled far to india for this film. You must have faced many challenges along the way. What is the worst challenge you have faced when making the film?

I filmed all around the world. I am therefore used to the different challenges a filmmaker can face. Shooting in India was not especially difficult. In fact it turned out to be a pure miracle.

My aim with this film was to show the parallels with the rituals performed by the Rroma in Macedonia and South of France with similar ones in India.

Kannauj in Utar Pradesh has been recently established as the city where all Rroma come from. I was not sure about the rituals currently performed there. My only contact was a Muslim and they live in a separate world with the Hindus. I had to rely on research. I knew that in Delhi they immerse an idol of Durga in the water, in quite a similar way as the Gypsies in Saintes-Maries-de-la-Mer. So I decided to film these rituals in Delhi and then go to Kannauj to film the remains of the ancient capital where Rroma have been expelled a thousand years ago. The shooting in Delhi went OK. We then travelled to Kannauj. The next morning we got ready to reccee. I always tell my crew to take a minimum of equipment, in case something happens. And it did that morning. We started with the Kali temple, which was not far from the hotel. As soon as we arrived, devotees painted our face with bright colors. I soon noticed that they were preparing for a procession. And this was a celebration of Durga: the same that I filmed in Delhi, but far better, more authentic. It was also more in tune with the main theme of the film, as it was focused on the dark Kali’s avatar, which looks like the Black Madonna in Saintes-Maries-de-la-Mer (precisely nicknamed Sara-la-Kali – Sara the black)… I never understood why this was performed 2 days later than the official calendar… I can only consider this as a pure miracle!

What is the most life-changing experience you have faced?

Once a person asked a Buddhist master how he could define his philosophy. He answered:”Everything changes”.

I indeed see my life as a constant changing (and learning) process. That’s a way to be constantly in tune with the motion of the Universe.  I therefore cannot mention any special life-changing experience.

You met many people during the course of the film. If you were to name one person who you got connected to during the production of the film that affected you, who would that be? why?

I loved the swami at the Kali temple. It was the first time I met a Hindu priest. He didn’t speak any English, but we instantly got connected. I love to communicate without words. With him, it was very easy as he is a very straightforward and funny person.

What is one funny story that happened behind the scene during the production?

I always like to end a shooting day with a good beer. It is a sort of ritual for me. My scientific adviser, Dr Marcel Courthiade who spent several months in Kannauj during his researches, warned me that there is absolutely no way to find any alcohol there. Too bad, but I accepted the fact.

On the end of the unexpected procession, we decided to stop on the way back from the Ganges to Kannauj. We were overwhelmed and exhausted by the intensity of what happened that day. Bubbly water was the only thing to slake our thirst. Suddenly a divine inspiration came to me. In a kind of a trance, I crossed the road and found the only place around Kannauj where one could buy beer!

I was really blessed that day! Kali was with me!

If you are at Rome between Dec 18 to Dec 23 and wish to watch “Rromani Soul”, get your film ticket at visit.connektexpo.com or contact Louis Mouchet with your request for a complimentary private invitation to Dec 19 private viewing and media day or Dec 18 VIP day.